Mogadishu is coming to life, again. These days, Mogadishu’s beautiful beaches are a hive of activity.

Nestled in the north of the Somali capital is Liido Beach, a popular hangout spot surrounded by beautiful hotels and restaurants.

These are a favourite weekend getaway for many local residents, who go there to relax and enjoy their days away from the hustle and bustle of Mogadishu City. 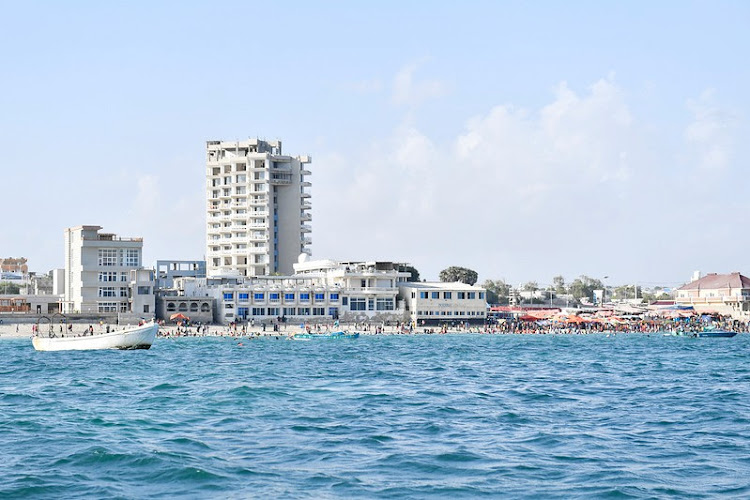 A view of the Liido Beach from the sea.  Image: AMISOM-OMAR ABDISALAN

Over the years – thanks to the increasing peace and stability that Mogadishu is enjoying – the city, and in particular its sprawling beaches, have seen an increase in the number of ordinary people visiting them for business and for pleasure.

The peace dividend is paying off in many ways, with Somalis from the diaspora also returning and investing heavily in the hotel and hospitality industry.

The kaleidoscope of colour and laughter that are the sights and sounds of Liido Beach are a far cry from the period before 2009, when Mogadishu was under the control of the militant group al Shabaab. The group’s reign of terror forbade any form of leisure activities and banned swimming. 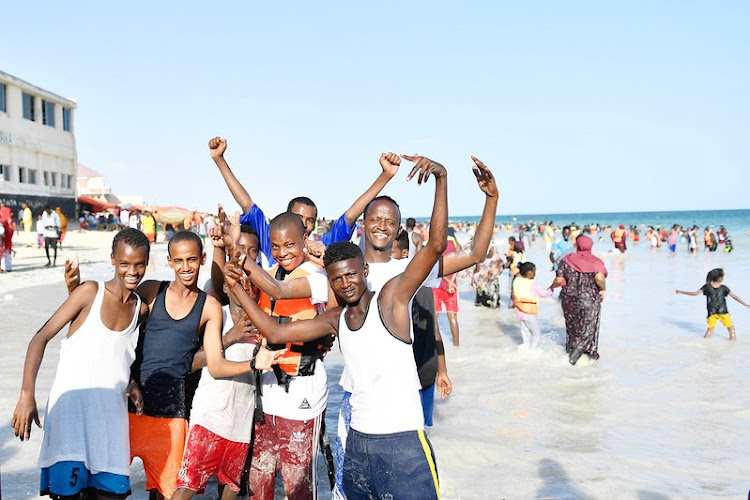 After the African Union Mission in Somalia (Amisom) forces routed al Shabaab out of Mogadishu in 2009, the city has been coming to life, regaining its former glory as a business hub and leisure destination.

According to the World Bank report of August 2019, Somalia’s “real GDP is projected to grow by 3.0-3.5 per cent, an outlook predicated on extension of the security gains and policy reforms the authorities have achieved to date”.

Mobile money transfers have revolutionised business in Somalia and transactions are easy and fast.

Today, the pristine waters of the ocean are beckoning. Liido Beach is a stretch of gorgeous sandy beach approximately two kilometres long in the north of the Somalia capital, Mogadishu, overlooking the Indian Ocean. The name Liido derives from the Italian word for ‘beach’. 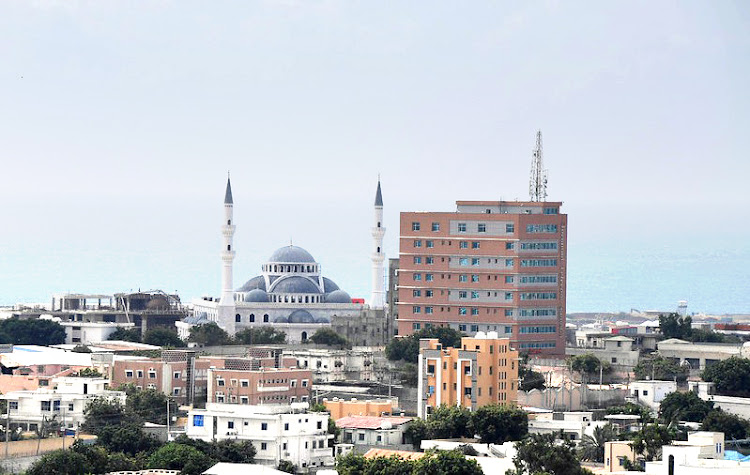 A mosque and new buildings rising in the city.  Image: AMISOM-OMAR ABDISALAN

In the 1970s and early 80s, the beach was full of foreign tourists and many locals. Today, as Somalia rebuilds after years of armed conflict, security in and around Mogadishu is very tight. For everyone’s insurance, there are several checkpoints manned by heavily armed police and paramilitary officers before one gets to Liido.

FOR FRIENDS AND FAMILY

On Fridays, which are weekends in Somalia, it is now a common feature to see hundreds of residents — young and old, mothers and fathers, boys and girls — flock to Liido Beach to dine, swim, play beach soccer or, simply, take a boat ride across the waters.

On the day of their graduation from Salaam University, close friends Sowda Abdirahman and Ruqia Afrah chose Liido Beach as the best spot to celebrate. 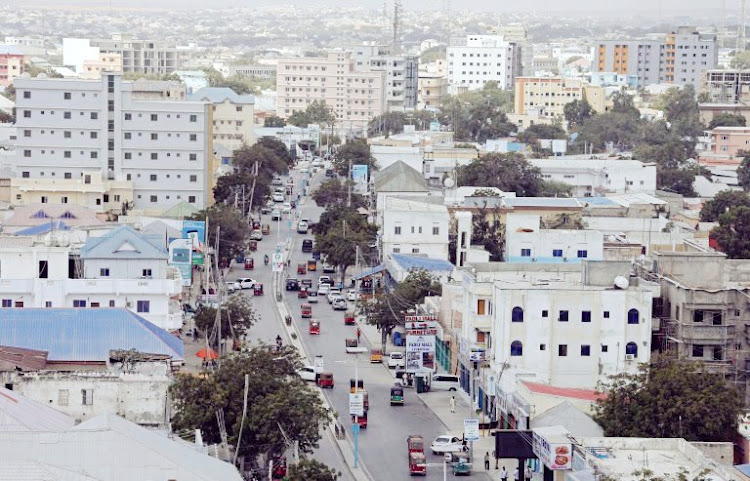 Clad in their black and green graduation gowns, the two young women were a standout among the swimmers. They confidently told us they were ready to help in the reconstruction of Mogadishu. They had both graduated with a degree in banking and finance.

We caught up with Sowda, 21, Ruqia, 22, and their families at the top balcony of Dolphin Hotel, which overlooks the ocean, giving one a bird’s eye view of the activity on the beach and of the serene waters.

“We came here to find a cool place to relax as we celebrate our graduation because this is one of the most beautiful places in the city. I came to enjoy the moment with family and friends,” Sowda said, standing at the edge of the balcony, gazing out at the beautiful view of Lido beach.

As she looks across the ocean, Ruqia, talks about the future she dreams of for herself and her country.

“First, I want to work for a big corporation. Then I want to start a unique business that is not common so that other girls could emulate me. That is why I studied banking and finance,” she said.

With improving peace and security as well as expanding business opportunities across the country, Mogadishu is experiencing a construction boom.

It is now home to several thriving businesses. International investors are coming in, and the locals are renowned for their industrious nature and entrepreneurship.

Inside the international airport, a Turkish company has constructed a 5-star hotel, the first of its kind, the Decale Hotel, with exquisite rooms, including luxurious presidential suites.

Across town, the first gated community, called Dar-u-Salaam, is complete and fully occupied. It features impressive villas, a children’s park, school, hospital and shops. The face of Mogadishu is changing, and changing fast.

In late November, the second Mogadishu Tech Summit, an annual gathering of tech-savvy digital entrepreneurs and innovators, was held successfully, attracting over 5,000 visitors, most of whom were youth.

Salaam Bank pledged US $5 million (Sh500 million) for the next three years to be made available to innovators and entrepreneurs, with access to the funds provided through iRise, Somalia’s first-ever technology innovation hub, which promotes collaboration between innovators and investors.

It also offers resources needed by budding entrepreneurs and startups, such as business training, mentorship, project evaluation and support, during the incubation stages of their projects.

Last year, Premier Bank injected $1 million (Sh100 million) into the tech summit, with close to a quarter of that amount already disbursed to emerging innovators and entrepreneurs.

“If we want to grow and develop our economy, it is very important that we invest in technology and encourage entrepreneurs,” Salaam Bank CEO Shuayb Mohamed said.

The Mogadishu of the past no longer remains; it has been replaced by the hustle and bustle of any capital city in Africa. The signs of progress abound, as Mogadishu continues to reclaim her position as an economic contributor to the Horn of Africa.

Cabdifatax Ibrahim (Ronaldo) - December 2, 2021
0
He met the Qatari Emir with whom he enjoys close ties as Doha has become one of Somalia’s biggest donors Somalia President Mohamed Farmaajo...

Turkish aid group to give relief amid deadly drought in Somalia

Cabdifatax Ibrahim (Ronaldo) - December 1, 2021
0
A Turkish humanitarian aid group announced Tuesday that it will take part in an ongoing relief campaign in Somalia because of a climate change-related...

Trump promotes lies about Ilhan Omar and suggests she apologize for ‘abandoning’ Somalia, which...

This website uses cookies to improve your experience while you navigate through the website. Out of these, the cookies that are categorized as necessary are stored on your browser as they are essential for the working of basic functionalities of the website. We also use third-party cookies that help us analyze and understand how you use this website. These cookies will be stored in your browser only with your consent. You also have the option to opt-out of these cookies. But opting out of some of these cookies may affect your browsing experience.
Necessary Always Enabled
Necessary cookies are absolutely essential for the website to function properly. This category only includes cookies that ensures basic functionalities and security features of the website. These cookies do not store any personal information.
Non-necessary
Any cookies that may not be particularly necessary for the website to function and is used specifically to collect user personal data via analytics, ads, other embedded contents are termed as non-necessary cookies. It is mandatory to procure user consent prior to running these cookies on your website.
SAVE & ACCEPT
WP to LinkedIn Auto Publish Powered By : XYZScripts.com
error: Sorry Lama ogola in aad daabacatid
MORE STORIES

IIhan Omar piles pressure on US over Somalia elections and Ethiopia...