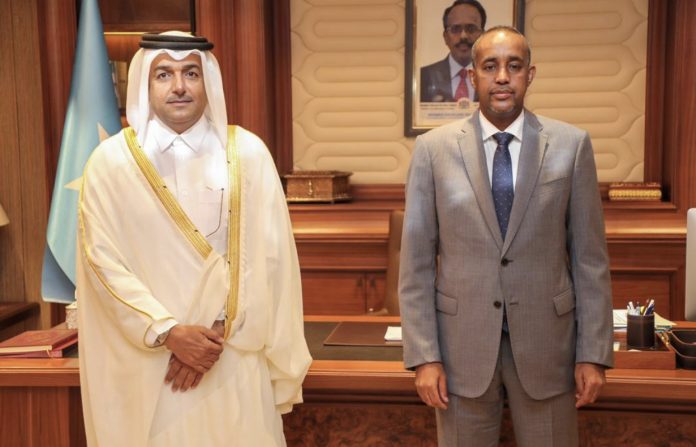 The Qatar government has sent one of its famous sons to help Somalis agree on a political solution. It looks good from the outset, but its timing is raising questions.

Dr. Mutlaq bin Majed al-Qahtani, a Special Envoy for the Foreign Minister of Qatar is a veteran diplomat. He has been in charge of counter-terrorism and mediation of conflict resolution. His CV includes his role in helping the Afghani government negotiate with the deadly Taliban for a political deal, which technically means the US troops can pull out of Afghanistan without leaving the war in their wake.

Put simply, he is Qatar’s focal point when it comes to the country’s international call for ‘responsibility to protect.’ With such an envoy, his coming signals Qatar’s seriousness in wanting to help. After all, his pedigree is of one able to put the toughest conservatives at a table to negotiate a deal.

There are alarms, however. Dr al –Qahtani arrived in the country just as the African Union announced it will be sending an envoy to Somalia this week. The AU’s decision, based on its mantra of African Solutions for African Problems, followed a series of reprimands from the African Union Peace and Security Council after it disagreed with President Mohamed Farmaajo’s s two-year term extension. Officials in Addis Ababa say the AU delayed deploying the special envoy after violence erupted in Mogadishu. The immediate action was to fast stop the fighting. The extension has now been canceled, providing the perfect opportunity for the AU to send its man or woman.

That Qataris sent a special envoy in the middle of Labour Day and when the legislators were attempting to correct their mess is suspect and looks self-imposed. Is he coming to undercut the African Union? What are the terms of reference for his involvement? How long will he be around?

We do not expect that Farmaajo’s government will ever provide these answers. But Qataris have been his strongest allies in the last four years even when Doha was accused by his critics of fueling Somalia’s problems.

For the last four years, Qataris pumped money into Farmaajo’s government, allowing Spy chief Fahad Yassin to clamp down on the dissent and journalists, and prop up Farmaajo’s feeble administration. Why would Qataris, accused of being partisan, want to provide a solution now? Can the solution be suitable for Somalia? Or are they looking for ways of appeasing their critics, just in case backing Farmaajo becomes untenable?

In international mediation, the acceptance of a mediator is a crucial factor. By Sunday evening, the Qatari envoy was meeting with opposition presidential aspirants. But not all of them took part. One critical comment came from ex-President Sheikh Sharif Ahmed who posed where Qataris had been these four years when everyone cried for help. President Ahmed may have his personal views on Qatar but he raised a valid point: He is the chairman of the caucus of aspirants known as the Council of Presidential Candidates. His absence from the sitting, while some members of his group attended suggests Qataris have already succeeded in dividing the opposition lobby.

We hope that will not be the case. But Qataris haven’t helped their case either. They stayed silent while Mogadishu burnt last week. They kept mum while Farmaajo extended his term, even when most partners in Somalia rejected it. Doha has claimed it is apolitical in Somalia. But its actions have contradicted it. By facilitating the work of NISA and Farmaajo to crush the opposition, it effectively took sides. They have been part of Somalia’s problem.

Doha may have had a Damascus moment. But that will demand that they continue riding this moral high ground to deliver goods beneficial to the Somali people, not a political faction. Doha should learn by now that it made mistakes backing a Farmaajo administration that wasn’t keen on advancing the Somali people’s interest. A long-term engagement should be based on people-to-people relations, not the occupier of Villa Somalia.

Qatari-Somalia relations will grow more by helping develop institutions in Somalia, which can withstand the personality cults of politicians who will come and go.