The oil and turf disputes are boiling over amid a surge in the activities of foreign countries in Somalia, which Kenya flagged as a threat to regional security 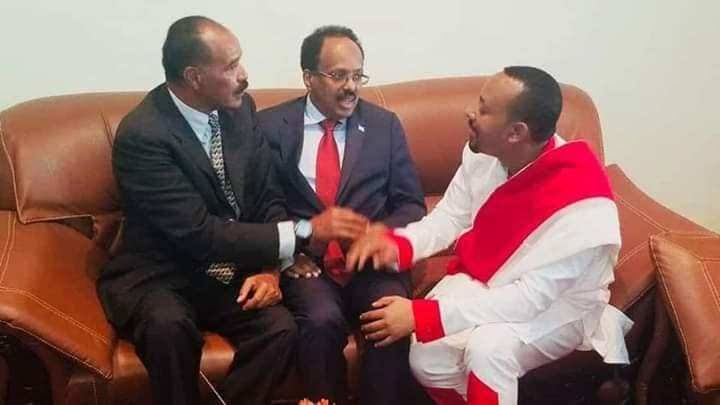 The fight for resources by Somali leaders has put Kenya’s interests at risk, with the Somali Parliament pushing for the withdrawal of the Kenya Defence Forces.

Somalia’s top hierarchy for the last couple of years has tactfully been using other foreign countries, its Parliament and the executive to isolate and reclaim what belongs to Kenya.

A report by the Kenyan security agencies tracking two Cuban doctors abducted on April 12 in Mandera stated that criminal elements in government and al Shabab terrorists have been breaking the wall at Balathawa. This is a key point for smuggling contraband, humans and arms.

The two doctors, Assel Correa and Landy Rodriguez, were sneaked out of the country through Balathawa, which is part of Jubaland.

Somali President Mohamed Farmaajo has not openly stated his displeasure against Kenya, but a number of media outlets have quoted his top officials negotiating with Turkey, Qatar, Ethiopia and Eritrea to support their military activities in Somalia to take over Jubaland from Kenyan troops.

Fahad Yasin, the chief spy of Somalia, led the negotiating team. He has a Kenyan passport that the Kenyan security agencies established he uses to travel across the world.

On Tuesday, a Somali minister and two MPs heading for a EU programme launch were refused entry at the Nairobi airport, despite holding diplomatic passports. They were sent back to Mogadishu after Immigration authorities said they had no valid visas.

In a protest letter yesterday, the Somali government reaffirmed its commitment to maintaining friendly relations with its Kenyan counterpart, saying it will continue to welcome Kenyan citizens and government officials to Somalia.

“The government of Somalia therefore calls the government of Kenya to consider the potentially destablising impact of these actions and to uphold the longstanding relations between our two nations, as well as the diplomatic norms in the spirit of reciprocity and mutual respect,” the Foreign Affairs ministry said.

“The government of Somalia also expresses its concern with regards to the reinstitution of mandatory stopover in Wajir, ostensibly for purposes of conducting additional security checks on Somali passengers.”

This spat marks an escalation in a dispute that has been simmering ever since Somalia sued Kenya at the International Court of Justice in 2014. Somalia is seeking a boundary review after claiming unlawful operations in her maritime territory, which is rich in hydrocarbons.

But now the Star has established the tensions spread beyond the maritime dispute to territory controlled by KDF. The Kenyan army went into Somalia on October 16, 2011, in Operation Linda Nchi to quell al Shabaab, before being absorbed into the African Union Mission to Somalia (Amisom) in March 2012.

The Farmaajo administration wants Amisom to scale down its presence in Somalia, particularly Jubaland. Amisom was created by the AU’s Peace and Security Council on January 19, 2007, with an initial six-month mandate that has since been extended multiple times.

Reports indicate that Farmaajo wants both Eritrea and Ethiopian forces to enter into Somalia through bilateral arrangements outside the Amisom mandate.

The activities by leaders in the Northeastern neighbour have exposed Kenya to a number of proxy diplomatic wars, with its leaders claiming Kenya’s territories and resources.

In February, Nairobi accused Mogadishu of auctioning oil exploration rights for a disputed part of the Indian Ocean before it is resolved. Nairobi wants the border to run along the parallel latitude southeast of Kyunga, while Somalia is pushing for a diagonal line down the Kenyan coast.

The House of Representatives in Somalia this week passed amendments to the 2008 Petroleum Act, which allows the Upper House to determine a revenue-sharing formula between the national government and the six federal states. Military sources believe Somali is targeting the 15 disputed blocks, despite the case still going on.

The Somali ministry maintained that blocks in the area currently under dispute with Kenya will not be licensed until a settlement is reached. However, the geographical location of some of the 15 blocks in question is in dispute.

“With the passage of the Petroleum Law, it is anticipated that Production Sharing Agreements (PSAs) will subsequently be signed, which will enable exploration activity to then commence and hopefully lead to discoveries,” the ministry said in a statement.

The push to review boundaries is supported by a spirited effort to push KDF’s exit in Somalia and scale down Uganda and Burundi armies under Amisom.

This comes against the backdrop of intelligence and media reports that Somalia was in talks with Ethiopia and Eritrea to negotiate for a secret military deal at the time its Parliament has demanded KDF activities be streamlined.

A source told the Star, “Already landlocked Ethiopia has developed a navy force that was disbanded decades ago after they separated with Eritrea. This is a clear indication that they might be eyeing Kismayo port to provide easy importation of commodities.”

Inside Somalia’s Indian Ocean border claim, and why Kenya disputes it

Did Somalia abandon the MoU it signed with Kenya in 2009 and all its contents?
NEWS
1 MONTH AGO

Kismayo and other contested regions are part of Jubaland, which is believed to be rich both agriculturally and economically. The federal member state is expected to conduct elections in this coming August 2019. It is also a front state to Kenya, hence being a national security concern.

Security officials believe the intention to bring Ethiopia and Eritrean military in Somalia outside the Amisom mandate is likely to isolate and put Kenya in an awkward position. State officials believe Somalia wants to use the two countries to influence Jubaland polls.

In December 2018, elections in Federal South-West State, where Ethiopian troops (Baydhabo) are based, were declared not free and fair by observers, following the unlawful abduction and subsequent arrest of Mukhar Robow.

“When UN Special Envoy Nicholas Haysom protested, the government of Farmaajo declared him persona non-grata, which was collectively condemned by the world,” a military source said.

Madobe, who hails from the Somali Ogaden sub-clan, is facing competition mainly from the Marehan clan, who are the majority in Jubaland.

A number of terrorist attacks have happened under the noses of top current intelligence officials, including Westgate, Garissa University, Lamu and El Adde.

WHY KENYA SHOULD BE WORRIED

In May last year, the Kenyan government warned that the activities of foreign countries in Somalia were a threat to regional security.

“The region is not at peace. Somalia remains troubled, largely by foreign agents who weaken its government, who divide its people, and who threaten to reverse the gains we have so painfully won under Amisom,” Uhuru said during a State of the Nation address.

A recent report by the Kenyan military published by the Star established Marehan clansmen were demolishing the border wall, riding on allegations of encroachment on their ancestral land by Kenya.

As the world watches keenly, pundits are left wondering what Kenya thinks.

This enabled al Shabaab to heavily rely on the porous border to carry out attacks in Kenya, collect taxes and carry out radicalisation activities. The report also warned that most senior al Shabaab commanders are from the clan.

“As a measure of protecting their interests in the town and across the border, al Shabaab has incorporated local Marehan clan members in preventing the border wall construction,” officers told the Star.

Kenya’s security agencies established that al Shabaab makes use of smuggling networks to sneak operatives and transport weapons into Kenya. The point, baptised as border point one in military circles, was used during the attacks on Garissa University College and Westgate mall.

Balathawa is a key point for smuggling contraband, humans and arms. The terrorist organisation considers Balathawa a key ground for its cross-border activities and has always endeavoured to control the town.

Military sources said many displaced Somali refugees settled in Mandera from Jubaland, making it easy for cross-border criminal activities since the collapse of the Siade Barre regime (also Marehan). Other people from the region also cross the porous border to school or business activities.

“Thousands of Somali citizens cross the border to access services such as education, entertainment and health from the Kenyan side. Most have fake Kenyan identity cards,” a state official told the Star.

Somalia is not just applying to join East African Community, it is being invited in

Somalia is not just applying to join East African Community, it is being invited...

Cabdifatax Ibrahim (Ronaldo) - February 4, 2023
0
Nearly 13 years ago, when even inside the high-security African Union Mission to Somalia (Amisom) camp they wouldn’t allow visiting journalists to step out...

Cabdifatax Ibrahim (Ronaldo) - February 4, 2023
0
The Somali National Army is making ready to take over the reins of national security from foreign forces under Atmis. A decade and half since...