An Improvised Explosive Devise (IED) that had been set up by al Shabaab terrorists hit and killed two curious hyenas in a bizarre incident in Konton area, Wajir County.

The area is near the Kenya-Somalia border where the terror group and their sympathisers roam freely targeting security agents and government officials.

Police said they heard an explosion on Friday midnight from their station and knew the terrorists were either on their way to the precincts or were attacking a mobile team.

This prompted the officers to go on alert but no attack came on the camp.

When they went on patrol Saturday morning, they realized two hyenas had been killed by the IED that had been set on the road to target security vehicles on the move.

The IED seem to have been set by an expert together with a battery to set it off.

The IED seem to have been set by an expert together with a battery to set it off. 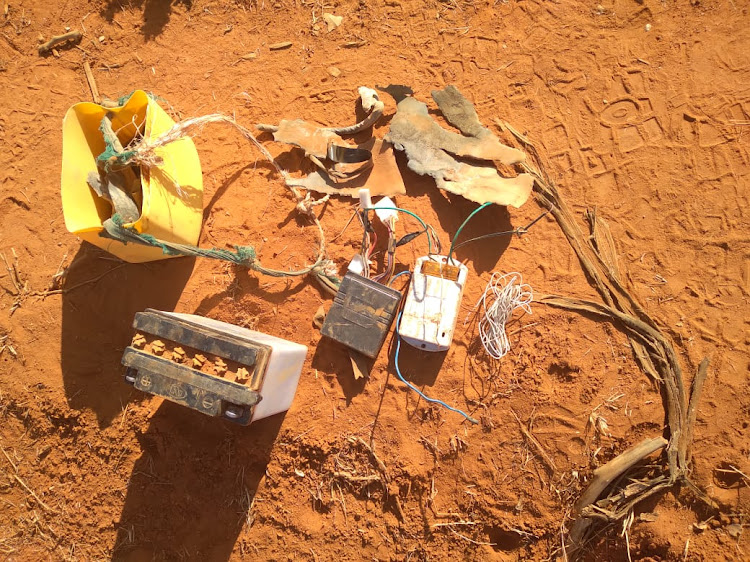 The IED seem to have been set by an expert together with a battery to set it off.
Image: COURTESY

Police said it was by the grace of God the hyenas were killed instead of them.

Hyenas are common in the area and they often roam there searching for food.

It is suspected they were curious of what had been planted there and in the process, they triggered the explosion.

This is the latest such incident to happen.

On Wednesday at least one security officer was killed and three injured when their vehicle was hit by an Improvised Explosive Device along the Omarjillo-Arabia Road in Mandera County.

The explosive had been set on the road to target the security personnel who were passing there.

Those behind the incident were not found as they had escaped.

Security personnel who arrived there soon after the explosion said they did not find anyone.

North Eastern regional police boss Rono Bunei said no arrest was made but added they had deployed more personnel there to ensure stability and safety for all.

“We continue to urge cooperation from the locals to help us tame this madness. No one can explain how these bombs are set on the roads without the knowledge of locals,” said Bunei.

Special Forces are among personnel who have been sent to the vast area to hunt down the al Shabaab militants behind the trend. 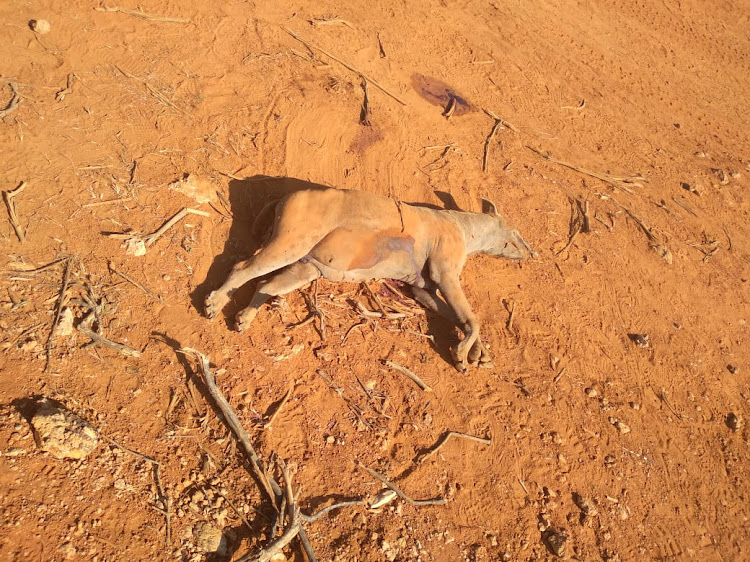 An Improvised Explosive Devise (IED) that had been set up by al Shabaab terrorists hit and killed two curious hyenas in a bizarre incident in Konton area, Wajir County.
Image: COURTESY

Northern Kenya has borne the brunt of the vice due to its strategic location with Somalia, a situation complicated by a porous border.

The militants have been targeting communication masts and government installations in Northern Kenya.

Also on the receiving end are civil servants and non-locals working in the expansive region.

This has crippled the education sector and more so after the Teachers Service Commission recalled most of non-locals teachers working in the troubled region.

Somalia has not had a stable government after the fall of Siad Barre in 1991.

The area is near the Somalia border and the militants usually cross at will and stage attacks before escaping back.

Al Shabaab terrorists have been attacking places in the region especially in Mandera and Garissa counties after breaching security zones, which left dozens of civilians and security officials dead and wounded.

More personnel have since been sent to the area and operations by the Border Patrol Unit heightened to tame the surge.

Kenyan troops are in Somalia to pursue and suppress the activities of the terror group.

Cabdifatax Ibrahim (Ronaldo) - February 8, 2023
0
Somalia's president has called for a cease-fire after clashes in a disputed town in the breakaway region of Somaliland left at least 13 people...

Cabdifatax Ibrahim (Ronaldo) - February 7, 2023
0
No fewer than 34 people have been killed in fighting in Somalia’s northern breakaway region of Somaliland, two doctors at a public hospital in...

A matter of life and death: the dangers of being a journalist in Somalia...

Cabdifatax Ibrahim (Ronaldo) - February 7, 2023
0
ournalism is a dangerous job in Somalia. No one knows this better than Abdalle Ahmed Mumin, an accomplished journalist and a press freedom advocate...

Common customs Somali women follow when they are pregnant