The two delegations were responding to a request from Doha government to broke deal and mediate the diplomatic feud between the onetime allies and close associates.

Somalia has recently attracted foreign investment after nearly three decades of civil war. Qatar is among the Gulf States countries that are struggling for the control of Somali Seaport, Airspace and its vast Natural Resource. Many believe that Qatari intervention in this case is driven by it’s desire to control the horn of Africa.

Qatar owned oil companies are also interested in the exploration of oil from Kenya maritime. The eastern Africa region has recently become the newest darling of major oil production firms from the globe.

Before the departure of Somali Prime Minister from Mogadishu, Qatar prime minister Abdullah bin Nasser bin Khalifa Al Thani held discussions with President Mohamed Farmaajo in Makkah where he was attending OIC Summit and brief him about the planned meeting between Kenya and Somalia officials in Doha.

PM Abdullah bin Nasser reiterated his country’s commitment to Somalia.  “ Qatar will use all its resources and influence to deescalate diplomatic row between the two countries: said the PM Abdullah. Both leaders were attending in the gulf state crisis meeting conveyed by the Saudi king Salman bin Abdulaziz.

President Farmaajo has given the green light for Qatari led mediation with assurance of accepting any outcome or amicable solutions recommended by premier Abdullah bin Nasser Al Thani. The Kenya delegation has also presented their decision over the disputed maritime territory. Kenya has being trying to persuade Somalia to withdraw the case at the International Court of Justice in favour of an out-of-court settlement, which could include shared development of the oil and gas resources.

The Doha authority proffered a proposal to postpone and halt the International Court  of Justice  (ICJ) verdict to give chance negotiations. Somalia was asked to petition the ICJ court to give more time as two countries find last solution.

It also offered to pay all legal bills owed to Somali government by the international lawyers representing Somalia in the ICJ, which has not been settled. Somali Prime Minister insisted on necessity of having a budget to request the court the postponement of the verdict to give room for negotiations.

Mr. Kheye also promised to send a high-powered delegation to Nairobi in the coming days, which will make a positive pronouncement in resolving the dispute. “Kenya will get a good news in the next few weeks” said PM Kheyre. A diplomat who traveled with Kheyre to Doha told MOL that Prime Minister Kheyre has in principal, agreed Qatari’s proposal  that Somalia withdraws from ICJ.

“Kenya having lost the preliminary objections to the admissibility of the case and the court’s jurisdiction, is worried that going ahead with the case could be risky and an out-of-court settlement was Kenya’s most preferred mechanism” Said Dr. Hassan Khannenje, the director, Horn International Institute for Strategic Studies,

The prime minister also revealed that he has deep bond with Kenya, as some of his family members are Kenyan citizen including his wife while his office employs eight Kenyan –Somali’s. The two nations have more common than what the eye can meet.

As the politic dust and the escalating diplomatic row seems to be narrowed following the Qatari broke deal. The ball is now on the Somalia’s court. The appeal to reschedule or suspend  ICJ case will be the determining factor.

Qatar government appoints it’s Kenya’s ambassador Jabor Bin Ali Al-Dosari as the special envoy in charge of implementation of the mutual agreement.  Qatar seems committed itself to reinforce the compliance of the memorandum of understanding.

At play are oil companies from the West – Norway, the US, UK, France, Netherlands and Italy – and the political divide in the Middle East that pits a group of countries led by Saudi Arabia and United Arab Emirates against those led by Qatar, jostling for an upper hand in Mogadishu.

As the initial face of the mediation moves forward, the next stubbing block will be the Somali parliament. Postponement of ICJ case will require the endorsement of Somali parliament. Somali lawmaker were recently in loggerheads with Kenya and lobbied against Kenyan troops staying in Somalia and construction of border wall in balad-hawa town.

20 killed in clashes with al-Shabaab in central Somalia

Kenya dismisses claim it is interfering with Somalia affairs 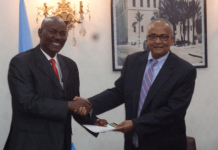 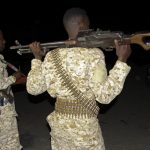 20 killed in clashes with al-Shabaab in central Somalia 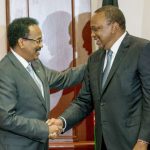 Kenya dismisses claim it is interfering with Somalia affairs

Cabdifatax Ibrahim (Ronaldo) - December 1, 2020
0
Nairobi says the claims by Somalia are nothing but unsubstantiated allegations. Kenya has denied claims by Mogadishu that it is meddling in Somalia’s internal affairs. Through... 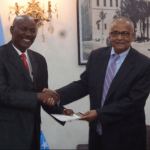 Faysal Ali Axmed (Alteeso) - November 30, 2020
0
The Somali government has expelled Kenya’s ambassador to the country after accusing his country of “continuous interferences in the internal and political affairs of...