Elders in the Somali community are highly regarded and have the ability to resolve dangerous and sometimes complex issues. 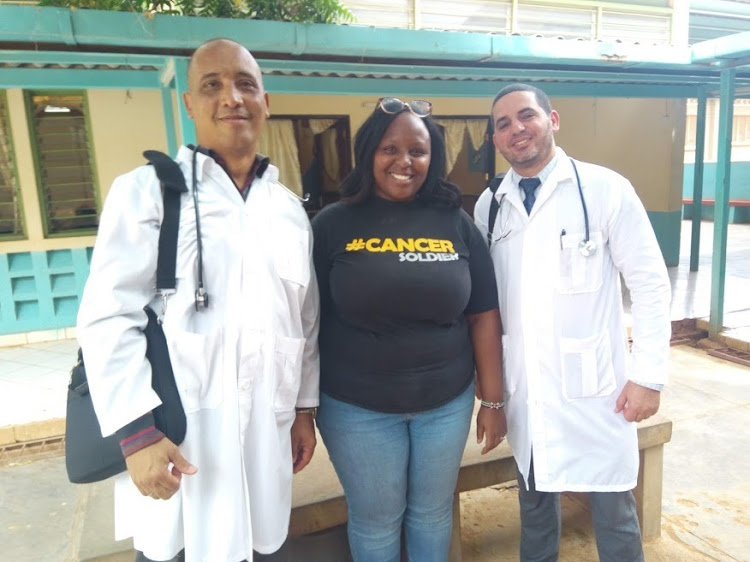 Mandera elders are in Somalia to negotiate with their counterparts the release of two Cuban doctors seized by suspected al Shabaab militants on Friday.

Elders in the Somali community are highly regarded and have the ability to resolve dangerous and sometimes complex issues.

At least 10 of them left for Somalia yesterday to start the talks.

At least 100 Cuban doctors work in 47 counties across the country in an exchange programme that saw about 50 Kenyan doctors travel to Cuba for specialised training last year.

On Friday suspected Islamist militants abducted Cuban doctors Herrera Correa and Landhi Rodriguez in an ambush in which a police bodyguard was killed near the Somali border.

It was the second abduction of foreigners in five months by a suspected al-Shabaab extremist group linked to the al Qaeda terror group.

The gunmen may have taken the doctors to Somalia, police spokesman Charles Owino said. He said the doctors’ driver had been detained to help with investigations.

On Friday Mandera Governor Ali Roba condemned the attack and appealed to the elders to initiate talks with their counterparts in Bulahawa and ensure that the two return to Kenya safely.

“We appeal to the security agencies to do whatever it takes to save the lives of our Cuban doctors and bring them back from captivity. I send my condolences to the family of the departed officer,” he said.

Mandera remained tense following the incident. Businesses were closed as security officers searched for the doctors.

Mandera has been the scene of frequent attacks in which dozens of civilians and security personnel have been killed. Al-Shabaab has taken responsibility for most of the attacks.

In November, raiders wounded five people among them two children. They also kidnapped an Italian charity worker in Chakama, a small town near Malindi. The fate of the Italian woman is unknown.

Al-Shabaab is fighting to topple Somalia’s central government and establish its own governance based on Islamic law.

The group frequently attacks Kenya, mostly on the border with Somalia, to put pressure on the Kenyan government to withdraw its troops from Somalia.  In January the group staged a major attack in Nairobi’s DusitD2 hotel in which 26 people died.

On Tuesday, the US embassy upgraded its travel warning for Kenya, listing “Do not travel” to Mandera county.

“Exercise increased caution in Kenya due to crime, terrorism and kidnapping,” the warning read.

On Friday the government deployed a multi-agency security team to Somalia in search of the missing doctors.

The police said the focus of the operation has shifted to towns in Somalia amid claims the terrorist group has changed tack in its modus operandi.

The medics were seized on their way to Mandera referral hospital at about 9am.

In a well-coordinated attack, the militants whose number was not immediately established, blocked the vehicle ferrying the doctors near Banisa stage at the heart of Mandera town.

According to witnesses, the armed gunmen were driving in a car which they used to obstruct the vehicle ferrying the medics.

The attackers are said to have alighted and opened fire at the police officers who were escorting the doctors, killing one instantly. Another cop escaped unhurt.

The gunmen then bundled the two foreign health workers into their (attackers) cars and speedily drove off towards the Kenya-Somalia border.

Their fate was not immediately clear as security officials did not issue a statement on their whereabouts.

Owino told journalists at Jogoo House that they suspect the doctors may have crossed the border into Somalia. He did not field questions from journalists.

According to the police, the militants were using two Toyota Probox cars when they waylaid the county government vehicle ferrying Hererra and Rodrigues to work.

It was not yet clear how the other officer attached to the doctors managed to escape.

Hererra and Rodrigues are among 100 Cubans who came to Kenya in mid-2018 to support local medics.

An MoU between Kenya and Cuba saw dozens of local doctors deployed to the foreign nation for further training.

He said the two also run the surgical outpatient clinic on Wednesdays and are on call 24 hours to handle any emergency surgeries, at times on patients from Somalia and Ethiopia.

Hassan said Herrera conducted daily ward rounds in the medical and pediatric wards and runs a medical outpatient clinic on Mondays and Fridays.

He was scheduled to conduct an appendix surgery on a prisoner whose future remains uncertain owing to the unfolding events.

Northeastern regional commissioner Mohamed Birik held a meeting with top county and regional security officers to review the events leading to the attack.

The incident happened barely hours after Birik, together with the county security team and Mandera governor, launched a six-year counter-terrorism plan.

Questions emerged on whether there were intelligence reports on the attack which was not acted on.

In a past interview with the Star, the medics raised concern over insecurity in the area in as much as they were committed to treating patients.

The attack came as a wake-up call as Mandera has not had any terror-related incident for the past three years.

Trade which had been picking up is now at the risk of being disrupted in the wake of the latest event. It is a mirror of the tricky security situation in the country.

Several leaders among them governors, parliamentarians, medical practitioners, and locals condemned the attack calling on security agencies to boost their intelligence-gathering networks.

Council of Governors chairman Wycliffe Oparanya asked Inspector General Hillary Mutyambai to harness all forces available to curb crime and ensure the safety of all medical personnel in the disturbed areas.

He asked the government to speed up the rescue process, adding that there was the need to bolster policing principles that would assure all Kenyans of their safety.

Dr Ouma Oluga, KMPDU secretary-general, urged the government to beef up security in areas such as Mandera.

“This incident calls for a reminder to all that medical workers should never be a target for insecurity since even during crises of conflicts given the humanitarian nature of the services they offer.”

Lafey MP Abdi Mude, whose constituency borders Somalia and which has borne the brunt of the militants in the past, urged the security agencies to ‘seal’ the porous borders.

Other counties where Cuban doctors were seconded also joined in piling pressure on the police to track their missing colleagues and ensure their safe return.

Kisii health officials said health workers’ security has always been at it’s best’ since the Cubans arrived in the region.

KTRH boss Enock Ondari said: “Somehow we surpassed their expectations. The Cuban doctors here have police deployed to guard them and their residences.”

The official said the abduction was an isolated case but one which calls for a review of security workers’ security.

In Nyamira, the county pledged to ensure doctors in the region are safe as they play a big role by offering the locals specialized healthcare.

Health CEC Douglas Bosire said: “The Mandera incident is saddening. It is not a good show. We will do everything necessary to ensure the Cuban doctors are safe.”

Dick Rayori, Kakamega county director of communication, said: “The Mandera situation was an isolated incident. It is not a situation where one can conclude that Cuban doctors are targeted as such.”

Cabdifatax Ibrahim (Ronaldo) - January 27, 2023
0
In light of the problematic drought conditions in the Republic of Somalia, Qatar Fund for Development (QFFD), in cooperation with Qatar Charity (QC), sent...

Cabdifatax Ibrahim (Ronaldo) - January 27, 2023
0
Bilal al-Sudani, an Islamic State leader, was killed on Wednesday night in a US counter-terrorism operation in a remote area of northern Somalia, according...

Cabdifatax Ibrahim (Ronaldo) - January 25, 2023
0
The East Africa Community has officially launched a verification mission to determine whether it will admit the Federal Republic of Somalia into the regional...
Load more
Follow
Subscribe to notifications

Somalia: Owner of Hotel Attacked By Shabaab Won’t Be Deterred From...