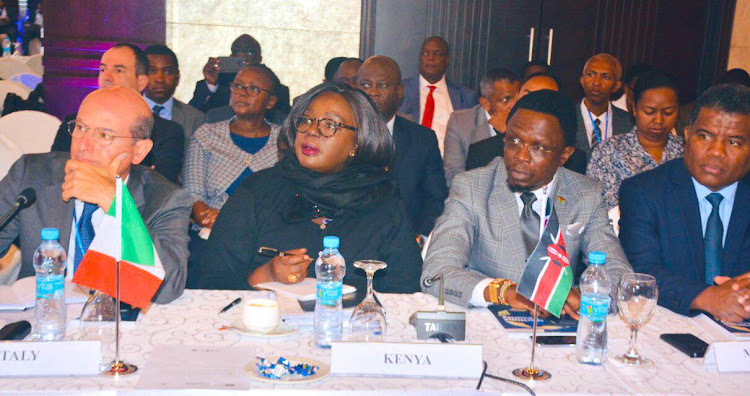 Kenya has been elected the chair of the Contact Group on Piracy off the Coast of Somalia (CGPCS) for a period of two years beginning January 2020.

The chairmanship will afford  Kenya the opportunity to coordinate regional and international efforts to deal with the challenge of piracy which remains a threat to the Maritime sector, despite being suppressed in recent times.

The unanimous decision was made at the 22nd Plenary Session of the group held on 20th June 2019 in Balaclava, Mauritius.

Maritime security is key to Kenya’s national security and the blue economy agenda.

While delivering her speech at the session, Defence Cabinet Secretary Raychelle Omamo said Kenya will work with all member states and stakeholders to ensure that efforts of the international community to deter and combat piracy activities through enhanced maritime surveillance, patrols and monitoring and capacity building remain agile and effective.

She was flanked by the Foreign Affairs Chief Administrative Secretary Ababu Namwamba.

Omamo said Kenya  will further endeavor to enhance information sharing amongst all stakeholders.

“This is key for effective coordination of counter-piracy programmes. As chair, Kenya will endeavor to provide strong leadership to consolidate the work done by Mauritius and the previous chairs and to secure the legacy of the group,” she said.

The move comes even as the diplomatic standoff between Kenya and Somalia takes an interesting turn over the oil fileds in Indian Ocean.

Arab Parliament on Thursday warned Kenya against meddling in matters of Somalia particularly interfering with its territorial boundary.

The Arab Parliament accuses Kenya of trying to “pretentiously draw a new and unfounded map in efforts to win over the territorial grounds”.

“The Arab Parliament calls on Kenya to stop its hands on Somali territorial waters, which are an integral part of the Arab waters, and rejects its false pretensions to draw up a new, unfounded map while rejecting its threats to interfere in Somalia’s internal affairs,” read a tweet by the Somali Ministry of Foreign Affairs.