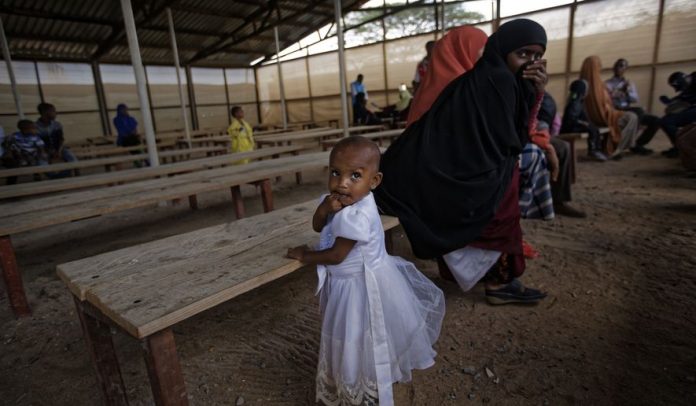 DADAAB REFUGEE CAMP, Kenya — Abdalla Osman sits on the ground next to his wife and three children in this sprawling, dusty refugee camp and explains why he wants to stay, even though Kenyan authorities desperately want him to leave.

He has built a good life in the camp since he escaped Somalia 30 years ago by opening a butcher shop, getting married, having children and creating a home, he said. But the Kenyan government said last month that it wants to shut down this massive United Nations-run camp complex and another to the northwest that together host nearly 440,000 people, a majority of them Somali refugees.

Mr. Osman said Dadaab is the only home he has ever known.

“I had nothing when I arrived at the camp,” he said in a recent interview. “But I have built my life from scratch. I have been able to enroll my children in school using the profits from my business. There’s no way I can accept my children dropping out of school and going back to Somalia.”

Kenyan officials, citing long-standing security concerns, announced plans a month ago to shutter the Dadaab and Kakuma camps for good. The governmentsaid it had intelligence reports showing that the two camps had become havens for terrorists and for smugglers and profiteers whose revenue helps bankroll the terrorists.

A meeting of Kenyan officials and representatives of the U.N. High Commissioner for Refugees produced a statement late last week saying the imminent closure was postponed two weeks to allow them to draw up a plan for “humane management of refugees” in both camps. A joint statement after the meeting revealed that 433,765 refugees were living in the two camps. Of those, 280,000 — 63% — were from Somalia, and the rest were from Ethiopia, Eritrea, Sudan, South Sudan, Burundi and Congo.

But Kenyan Interior Secretary Fred Matiang’i said after the meeting that Nairobimaintained its official position: that both camps would be closed for good by June 30.

The decision is leaving hundreds of thousands of refugees caught in the middle. Some of them were born and raised in the camp or, like Mr. Osman, arrived as a child. Their homeland of Somalia is little safer than it was when they fled years and decades ago with a weak, faction-ridden central government menaced by an increasingly brazen al Qaeda affiliate known as al-Shabab.

Mr. Osman came to Dadaab at the age of 13. Somalia had descended into civil war after the ouster of Mohamed Siad Barre in 1991. Power struggles between clan warlords led to the rise of fundamentalist Islam and the birth of the al-Shabab movement, which today controls significant territory and continues to terrorize Somali civilians. The insecurity and political instability have forced hundreds of thousands to flee.

Now, critics say, the Kenyan government wants to send them back into a dire situation.

“Where do they want us to go?” asked Mr. Osman, 43. “There’s no safe place in Somalia. People are being killed daily by terrorists. We can’t go there to die.”

But Nairobi insists it must protect Kenyans and that the presence of the refugee camps is one reason the Somali conflict has spilled over the borders into Kenya. Until the Myanmar repression campaign against the Rohingya Muslim minority sent more than 600,000 people fleeing across the border into Bangladesh, the Kenyan complex was often listed as the largest refugee camp in the world.

“We must bring this to an end. Refugee camps are not permanent features. How can we continue shouldering the burden for three decades?” Mr. Matiang’i said.

Another official told the Nation, a leading Kenyan daily, “We can’t continue spending too much money thwarting terror attacks when we can resolve the problem by closing the camps.”

The destabilizing potential of closing the camps has also attracted the attention of the Biden administration. Acting Assistant Secretary of State for African Affairs Robert F. Godec told reporters last week that the U.S. was “very concerned” about reports of an abrupt closing of the camps and that he had spoken directly with Kenyan government officials about their plans.

“The Kenyans have committed to live up to their international commitments with respect to the refugees, and we welcome that commitment,” Mr. Godec said April 26. “We expect them to do it,” though he added that discussions were continuing.

The Kenyan government, citing economic and security reasons, also threatened to close the camps in 2016, but the nation’s high court ruled that the move was illegal and unconstitutional and blocked the plan.

It will be no easy logistical feat to close Dadaab, which has grown to be effectively Kenya’s third-largest city after Nairobi, the capital, and Mombasa.

The camp, which began as a temporary shelter for 90,000 refugees fleeing the Somali civil war, has grown into a complex of three distinct camps. Two others were closed in 2017 and 2018 after hundreds of thousands entered a voluntary repatriation program and returned to Somalia.

Camp residents have set up primary and secondary schools, hospitals, sprawling produce markets and soccer leagues. On the streets, women line up to sell plantains, fish, eggs, vegetables, tomatoes and onions. Others sell clothes, shoes and other merchandise at stalls. Butchers hang meat from goats and chickens under metal awnings.

Fawzia Mohamed, a teacher, in Dadaab, predicts it will prove impossible to close one of the largest camps in the world given the instability in Somalia.

“They will fail again,” she said. “No one is going to Somalia. People have businesses here, children are going to school and families continue to give birth daily. You can’t kill all those dreams in a single day.”

U.N. High Commissioner for Refugees Filippo Grandi said Kenya will come up with a solution. “They want to see [a way] forward,” he said.

Bill Frelick, head of the refugee and migrant rights division for Human Rights Watch, wrote last month that U.N. refugee officials have “no quick fix to offer [Kenya] consistent with its protection mandate.”

But simply closing the camps will not solve the problem for the refugees or their host, he said.

“Of course, many refugees would like to go home, indeed anywhere but these remote camps, but declaring the problem solved and threatening to truck people to the border is not a solution; it’s a recipe for further dislocation and suffering,” Mr. Frelick wrote on the rights group’s website.

“Until the situation in Somalia stabilizes, Kenya needs to maintain asylum and consider allowing refugees at long last to integrate …,” he said. “Meanwhile, donor governments need to provide financial support and resettlement opportunities that can keep a glimmer of hope alive for those living in the camps.

But officials in Kenya are clearly losing patience and note that they also have concerns about residents’ relationships with al-Shabab, which has struck Kenyain spectacular fashion several times in the past decade.

In 2013, militants attacked the upscale Westgate shopping mall in Nairobi and killed 67 people. A year later, they attacked Mpeketoni and surrounding villages in the northern coastal region and killed more than 60. In perhaps the most horrific incident, terrorists in 2015 staged an attack on Kenya’s Garissa University and killed 148 people, primarily non-Muslims. The militants want to force Kenya to withdraw its soldiers from Somalia, where they are part of an African Union peacekeeping mission.

Analysts said the government is exaggerating the security concerns to have a reason to shut down the camps. The local economies benefit from having the refugees. Some say it is politics that is driving the closure bid.

The security danger is “no longer from Muslim extremists but rather [from] radicals and [criminals] who are out for hire,” said Gerald Majany, a professor of international relations and diplomacy at Presbyterian University of East Africa. “They change their outfits when the need arises. Otherwise, they are the shopkeeper, the lawyer, the doctor, etc. The closure of the camps is a knee-jerk [reaction] but not a way to deal with terrorism.”

He said the government closure order is more likely retaliation for Somalia’s insistence on pursuing a case at the International Court of Justice over a disputed maritime border. The two countries’ relationship has deteriorated since Somalia cut off diplomatic relations last year with Kenya, citing what it said was interference in its internal affairs. Now, this move is because of politics, “not necessarily a security, peace and safety agenda,” he added.

For refugees, though, geopolitics don’t matter. Losing everything they have built over decades does.

“I would rather die here than be taken back to Somalia,” said Mr. Osman. “I promised myself never to set my foot in Somalia again.”