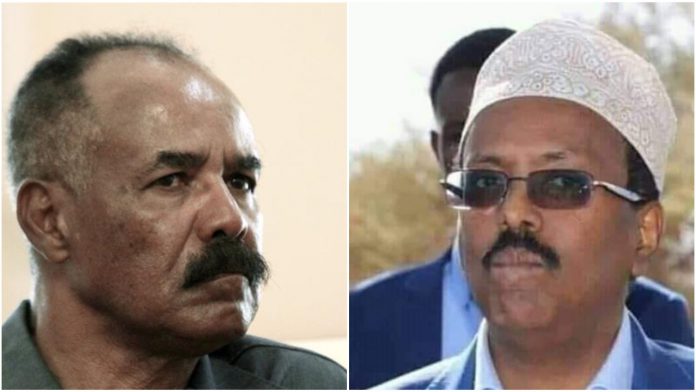 Mohamed Farmaajo of Somalia faces a daunting task of taking over the nation’s security operations at a time when the country’s donors and some federal states are not happy with the decision of the Lower House of parliament to extend their term and that of the president.

In a pre-recorded interview in Somali and aired early Friday evening, President Farmaajo defended the controversial extension of his term, saying it gives the people of Somalia the power to decide their future.

The extension of his presidency came as the African Union Mission in Somalia (Amisom) — the continental combat force that has been keeping guard in Somalia since 2007 — announced it was transferring security roles to local forces.

The extension now raises fears that some federal states might not co-operate on the unification programme for security forces, which is part of the plan to have the federal government of Somalia entirely in charge of its security.

Opposition group, the National Salvation Forum, which also counts as member presidents of Puntland and Jubbaland states, warned on Tuesday that the extension of the president’s term was a threat to Somalia’s peace and security.

Under a gradual arrangement, crucial roles including plans against militant groups al-Shabaab and guarding of installations will be taken up by specialised forces of the Somali National Army.

Francisco Madeira, the head of Amisom speaking on Wednesday in Mogadishu said that the Mission was marking an “important milestone” for Somalia’s peace and stability.

“Somalia security forces are to assume a lead role in their own security operations, as laid out in the Somali Transition Plan (STP),” he said while addressing senior military officials among them Somalia’s Chief of Defence Forces Odawa Yusuf Rage and government officials.

“Amisom is expected to gradually transfer security responsibility to the Somali security forces; joint planning and co-ordination, as well as harmonised force reconfiguration will enable the mission to maintain operational effectiveness,” he added.

The Somali Transition Plan was an Amisom goal set in December 2017 between the federal government of Somalia and the international community, who agreed to gradually transfer security responsibility to Somali forces by 2021.

Amisom, which has until December this year to start leaving Somalia, will still perform orientations for local forces and provide security in various sectors of the country where troops from various countries are deployed.

But donors who have funded security operations in Somalia for the past decade are angry with an extension of term that effectively shut down negotiations to hold indirect elections.

The Lower House of parliament had recently endorsed a motion to extend its own term and that of President Farmaajo, ostensibly to provide time for universal suffrage.

Donors demanded that President Farmaajo and federal state leaders resume talks on holding an indirect election as earlier agreed. They failed to agree on the composition of electoral management teams, venues and security arrangements for the elections. Puntland and Jubbaland accused President Farmaajo of dictating terms, even after the expiry of his term.

After assenting to the Bill that extended his term, President Farmaajo vowed to stick by it. A statement issued on Wednesday night called for support, rather than criticism after the president assented to the Bill.

“The decision was broadly supported by key stakeholders in the country, including the federal government, Benadir Regional Administration and three out of five federal member states namely Hirshabelle, Galmudug and South West. We urge our friends and allies to continue their constructive support.

“The federal government of Somalia stands by the decisions made by the federal parliament and remain committed to implementing free and fair elections in the country within the stipulated time-frame.”

President Farmaajo reached out to various Western donors, explaining the legality of the move, and arguing that parliament was a sovereign arm of government. He didn’t, however, explain why one House, rather than a bicameral sitting, had extended his term. The term of parliament, in fact, expired on December 27 and there were legal questions on whether it could extend its term well after it had expired.

In a series of co-ordinated statements, the US, UK and the European Union said they will consider “changing” the nature of relations with Somalia, falling short of threatening sanctions.

US Secretary of State Antony Blinken said the US will “re-evaluate” bilateral relations with Somalia if the president forces through the extension.

“We have also made clear that the United States does not support mandate extensions without broad support from Somalia’s political stakeholders, nor does the United States support parallel or partial electoral processes.

“It will compel the United States to re-evaluate our bilateral relations with the federal government of Somalia, to include diplomatic engagement and assistance, and to consider all available tools, including sanctions and visa restrictions, to respond to efforts to undermine peace and stability.”

The motion was endorsed by 149 MPs in a House of 275. It was not tabled before the Senate as is tradition and President Farmaajo promptly endorsed its passage.

“The European Union believes that the passage and signing of this resolution will divide Somalia, impose additional delays and constitute a grave threat to the peace and stability of Somalia and its neighbours. It certainly does not serve the interests of the people of Somalia,” said Josep Borrell, the EU High Representative.

“We call for an immediate return to talks on the holding of elections without delay based on the September 17 agreement. Failing this, the EU will consider further concrete measures.”

The motion also effectively shut down talks on how to conduct an indirect election as agreed on earlier, crossing one of the red lines established by donors on the electoral model.

“This is not a solution to the ongoing impasse on the electoral process, but instead a move that undermines the credibility of Somalia’s leadership and risks the safety and future of the Somali people,” said James Duddridge, the UK’s Minister for Africa.

“In the absence of consensus leading to inclusive and credible elections being held without further delay, the international community’s relationship with Somalia’s leadership will change. The UK will work with its international partners on a common approach to re-evaluate our relationship and the nature of our assistance to Somalia.”

The East African By AGGREY MUTAMBO