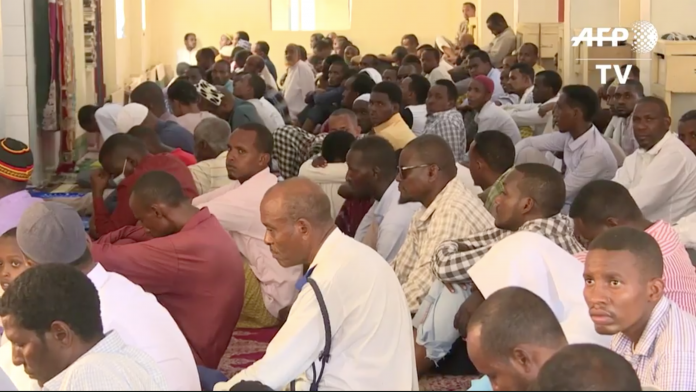 Adan Abdullahi knows that visiting the mosque for evening prayers is forbidden. There is a curfew in place in the Somali capital, and authorities have pleaded with worshippers to stay home as coronavirus infections rise.

But it is the holy month of Ramadan – one coinciding with a deadly outbreak that has officially claimed 39 lives but likely hundreds more in under-resourced Somalia – and Abdullahi can think of no better time for faith, so refuses to follow the rule.

“When disaster strikes, you go to the mosque and pray so that Allah solves your predicament,” the 42-year-old father-of three told AFP in Mogadishu.

But elsewhere in the city, as containment measures are ignored or half-heartedly enforced, graves are furiously being dug to accommodate a spike in unexplained deaths.

Known cases of coronavirus have jumped 14-fold since mid April to 873 but government officials suspect the true toll is vastly higher due to a lack of testing.

“We lack sufficient testing capabilities for people who are sick” and the doctors, nurses and medical personnel to man the hospitals and labs, said Mogadishu mayor Omar Mohamud.

Humanitarian agencies fear the fragile state, already confronting an armed insurgency, a record locust invasion and heavy flooding, will not cope should the virus spiral further.

“We are seeing widespread community transmission in a country that will not be able to handle a multitude of severely ill patients at once,” said Richard Crothers, country director for the International Rescue Committee.

People with Covid-19 symptoms were being told to stay home to free up what scant hospital resources are available for the seriously ill, further suggesting the official count was off, Crothers added.

The World Health Organisation warned on 23 April that unless the rate of transmission slowed rapidly, Somalia’s parlous health care system would quickly be swamped.

Instead, the caseload has ballooned as the government has struggled to convince people of the seriousness of the disease sweeping the globe, and the need to stay home and avoid large gatherings.

Streets, markets and mosques are bustling in Mogadishu, weeks after the first Somalis tested positive for Covid-19.

Police on patrol use megaphones to urge bystanders to keep their distance, and posters in the streets carry government advice about the disease, but few pay attention.

“Nothing’s changed here. We can still visit others, and go anywhere we want,” said Ali Moallim Nur, shrugging off the health advice on a Mogadishu street.

A curfew has proved fruitless in the capital – especially so during Ramadan, a time when Somalis visit each other’s homes in the evening to break their fast together, and pray even more than usual.

Some idling at restaurants and cafes have been told to move on but police in the Muslim-majority country are reluctant to target the devout, or punish mosques that remain open for evening prayers, despite the blatant breach of curfew.

“Can you imagine, it is Ramadan, and you are asked not to go to the mosque?” said Abdullahi in disbelief.

“Ramadan is all about devotion to Allah and going to his house for prayer. I still perform the prayers, and I understand there is Covid-19, but we pray God will save us from this disease.”

But in Barakat, a Mogadishu suburb, cemetery worker Ali Maow said the number of burials doubled in April, with sometimes 25 bodies arriving on a single day.

“Before this coronavirus, it was maybe 10 or 12 a day – you can see the increase. I can’t say if they died because of the virus, but most are elderly,” he said.

Mayor Mohamud said as many as 500 unexplained deaths occurred between 19 April and 29 April in Mogadishu, an anomaly city authorities suspect, but cannot prove, is linked to coronavirus.

Authorities must also contend with a stigma rife in Somalia that views those wearing face masks in public with suspicion and hostility.

“Hardly anyone is wearing face masks. Those that do are harassed, and called ‘Mr Coronavirus’, said Abdirahman Mohamed Jimale, a 22-year-old Mogadishu resident.

Mohamed Sharif, a chauffeur for an international agency, said he had to wear a face mask at work, but found people outright avoided him or even ran away in his presence.

“People are very ignorant (of the disease) here, and that is why most of them are sick without knowing it,” he said.