• But a petroleum law that has not yet been adopted by the country’s parliament but is being invoked by federal officials in the capital Mogadishu says that the central government can distribute natural resources. 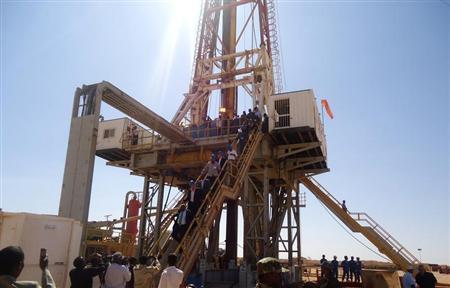 Engineers and visitors explore an exploratory well near Dharoor town, 350 km (217 miles) from the port of Bosasso on the Gulf of Aden in Puntland January 17, 2012.
Image: REUTERS

Western commercial oil exploration in disputed areas of Somalia and discrepancies over which authorities can issue licenses to companies could spark further conflict in the African nation, U.N. monitors warned in a confidential report.

But a petroleum law that has not yet been adopted by the country’s parliament but is being invoked by federal officials in the capital Mogadishu says that the central government can distribute natural resources.

“These inconsistencies, unless resolved, may lead to increased political conflict between federal and regional governments that risk exacerbating clan divisions and therefore threaten peace and security,” the experts group said in an annex to its annual report, which was seen by Reuters.

The overthrow of a dictator in 1991 plunged Somalia into two decades of violent turmoil, first at the hands of clan warlords and then Islamist militants, while two semi-autonomous regions – Puntland and Somaliland – have cropped up in northern Somalia.

Around a dozen companies, including many multinational oil and gas majors, had licenses to explore Somalia before 1991, but since then Somaliland and Puntland and other regional authorities have granted their own licenses for the same blocks.

In some cases Somaliland and Puntland have awarded licenses for blocks that overlap. The experts said one such case involves Norwegian oil firm DNO (DNO.OL) and Canadian-listed Africa Oil Corp AOI.V.

“Potentially, it means that exploration operations in these blocks, conducted by both DNO and Africa Oil under the protection of regional security forces, its allied militia or private forces, could generate new conflict between Somaliland and Puntland,” the report said.

“It is alarming that regional security forces and armed groups may clash to protect and further Western-based oil companies interests,” it said.

“In this case, the involvement of a Norwegian company on one side and of a Swedish-owned/Canada-based company on the other, is even more disturbing, considering the long-standing implication of Norway and Sweden in promoting peace and dialogue in Somalia,” the experts said.

Bjorn Dale, DNO’s acting president/managing director and general counsel, said he was not familiar with the U.N. experts’ recent report but said that the company would never engage in activities that threatened peace in Somaliland.

Somalia is struggling to rebuild after decades of conflict and a U.N.-backed African Union peacekeeping force is trying to drive out al Qaeda-linked Islamist rebel group al Shabaab. Piracy off the Somali coast is also a problem.

The U.N. experts also expressed concern about a clash between a longstanding bid by Norway to urge Somalia to implement an exclusive economic zone (EEZ) off its coast with commercial interests by a Norwegian oil company.

Under the U.N. Convention of the Law of the Sea, an EEZ would allow Somalia 12 nautical miles of territorial control with claim to sovereign rights to explore, exploit, conserve and manage natural resources that exist within 200 nautical miles.

MPs to quiz Juma on Somalia feud
MPs will this morning question Foreign Affairs CS Monica Juma on the diplomatic row between Kenya and Somalia.National Assembly’s Defence and …
NEWS
3 MONTHS AGO

The U.N. convention then requires Somalia to negotiate a maritime boundary with Kenya, which the U.N. experts said could lead to several disputed oil exploration blocks being deemed to be in Kenyan waters.

The U.N. report said late last year that Kenya had suspended Statoil’s STL.OL license for block L26 because the Norwegian company did not want to spend money on exploration while there was the legal uncertainty over the maritime border with Somalia.

A Kenyan government official told the U.N. experts that Statoil had expressed an interest to develop the area should a boundary be agreed with Somalia and the L26 block was deemed to be in Kenyan waters.

“Efforts by Norway to lobby Somali officials to adopt the EEZ now coincide with current Norwegian interest in the fate of L26 as well as with Norwegian involvement in the application of a Special Financing Facility donor fund of $30 million which has been allocated under the management of (Somali government) officials with a track record of corruption,” the report said.

The experts suggested that Norway’s development assistance to Somalia could be used “as a cover for its commercial interests there,” a claim it said Norwegian International Development Minister Heikki Eidsvoll Holmas has denied.

Norway’s U.N. mission did not immediately respond to a request for further comment.