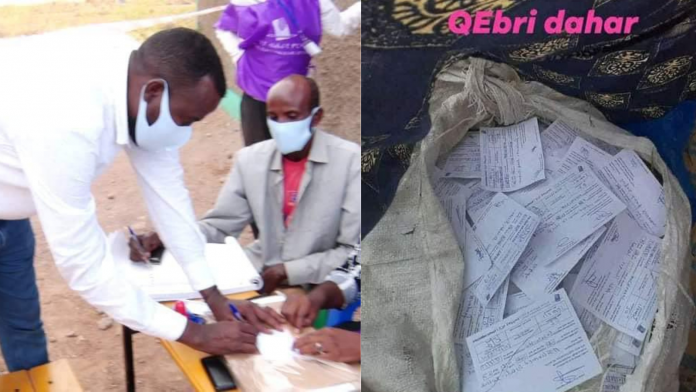 The Somali Regional State, which once was praised as the most peaceful region in the country in the advent of Prime Minister Abiy Ahmed’s ascension to power, is now confronted with with a cascade of voters registration related fiasco and a serious indictment of worrying human rights violation.

Since the outseting of the former regional president Abdi ‘Illey’ Mohammed which was followed by the inauguration of Mustefa ‘Cagjar’ Omer as the new deputy regional president, the Somali regiobn has been hailed as the most peaceful regional state on one hand, the scene of repeated episodes of violence on the other, especially over the course of last year.

The region witnessed episodes of police violence and border clashes with neighbouring Afar Regional State that left scores of civilians dead; most notabl critics say the region has become a scene of political instability which is threatening gains made so far. The regional government and the regional chapter of the ruling Prosperity Party (PP) and the Ogaden National Liberation Front (ONLF) have been engaged in political maneuvers , with the latter complaining of interference by the regional government in its internal dynamics and intimidation by arresting senior members of the party.

In the latest such development in the relationship between opposition parties operating in the region and the regional government led by the regional chapter of the ruling Somali PP, came to light when a letter cosigned by the Ogaden National Liberation Front (ONLF), Freedom and Equality Party (FEP), Ethiopian Citizen for Social Justice (EZEMA), and Somali State Independent Candidate Representatives was issued asking for voter registration process to be suspended until credible and independent NEBE officers were brought in, opposition parties’ agents are allowed into stations with minimum bureaucratic hurdles and a transparent voter registration process is out in place. The cosigning opposition parties said they suspended all election activities until their demands were met.

“if the demands are not met the general atmosphere within the ONLF point to withdrawal from the upcoming elections.”

Abdi Mahdi, the ONLf chairman told Addis Standard: “We sent a joint letter to the National Electoral Board of Ethiopia (NEBE) and we expect their answer within the deadline indicated in the statement.” According to him, “Somali PP has taken over voter registration centers and controls them, they deny our members access, they deny our supporters access, they are only allowing known PP supporters.” He asks, “who is going to vote if this is what is happening? even TPLF did not intimidate its opposition the way Somali PP is doing.

Abdi Mahdi said they have informed the NEBE of their complaints and threatened “if the demands are not met the general atmosphere within the ONLF point to withdrawal from the upcoming elections.” he added however, “the party’s final decision will be decided when there is a response from the NEBE.”

In a Facebook message posted this morning, Mustafa Omer accused the complaining opposition parties as having links with the “TPLF and Abdi Iley.”

“…it actually is the view of 1 when you know the background of the 8, their current connection to each other, and their history with TPLF and Abdi Iley.”

“A headline that “4 political parties and 4 individual candidates expressed concern that the voter registration process in Somali Region is manipulated by the ruling party” may seem the views of 8, but it actually is the view of 1 when you know the background of the 8, their current connection to each other, and their history with TPLF and Abdi Iley.”

Supporters of the ONLF also accuse the Somali region branch of the incumbent Prosperity Party with claims of “stuffing away voting cards intended for the public in bags and containers.”

The region under the leadership of Abdi Illey held one of the worst human rights records. A prison known widely as ‘Jail Ogaden’ stands as a symbol of human rights violation.

Jail Ogaden was shortly closed after the arrest of the former regional president Abdi Illey who is accused by many Somalis in the region of being the architect behind toture chapters in the infamous prison.

But a recent report by the government’s Ethiopian Human Rights Commission (EHRC) about the condition of prisons and of juvenile detainees evokes the bygone era memories under the leadership of Mustefe Omer. The EHRC said that it had interviewed and had discussions with prisoners, police departments, prison administrations and regional leaders in the Somali Region on the conditions of the human rights inside some of these detention centres across the region and published a report. The commission said, “The conditions at detention centers across the region is worrying. The conditions of prisons, especially at a detention center in Jigjiga City Council Police Department, commonly known as ‘Havana’ and another detention center near kebele 04 is worrying.”

“a recent report by the government’s Ethiopian Human Rights Commission (EHRC) about the condition of prisons and of juvenile detainees evokes the bygone era memories under the leadership of Mustefa Omer.”

The report discussed the denial of family visits and due process as well as beatings and physical abuse of detainees and further explained that detainees are held in unclean, overly crowded cells where they suffer from shortage of food.

A noteworthy observance that is mentioned in the report is the detention of juveniles, which according to the report, violates article 172 of the constitution which stipulates that underage suspects shall be released with bail without any preconditions.

Despite comments by the commissioner of the EHRC, Daniel Bekele (PhD) that “there have been encouraging steps taken by the Somali regional government to ensure human rights and law enforcement but the issue of Juvenile offenders needs special attention and immediate action,” the report disclosed that more than 50 juvenile offenders are held with adult offenders in violation of Article 36 (3) of the constitution.

The EHRC said that it had notified the city administration as well as the regional leaders of the human rights violations in the detention centers in corresponding letters dated on December 17, 2020 and March 18, 2021 and highlighted that despite repeated promises of closure of the “Havana” police detention center, it has not been translated to actions yet.