With a land mass just larger than SA’s Kruger National Park and a population of 1-million, Djibouti punches well above its weight politically. The Horn of Africa country controls the mouth of the Red Sea and, with that, access to the Suez Canal, one of the busiest shipping lanes in the world. As a result, it hosts US, French, Italian, Chinese and Japanese military bases; a Saudi base is also in the works.

But the government’s seizure of an Emirati-run container terminal — a move allegedly provoked by China — suggests it is looking to leverage its strategic status.

Back in 2006, Djibouti’s president, Omar Guelleh, signed a 30-year deal with Dubai-based DP World — one of the largest port management companies in the world — to build, manage and operate the Doraleh container terminal. The terminal opened in 2009 as a joint venture between DP World, with a 33% stake, and the Djibouti port authority, the PDSA, with 67%. Then, in 2013, Hong Kong-listed China Merchants Port Holdings Company (CMPort), checked a subsidiary of the state-owned China Merchants Group, took a 23.5% holding in PDSA.

The port “proved to be a tremendous success, generating annual profits worth tens of millions of US dollars”, according to a report in Global News.

But relations between Djibouti and the United Arab Emirates (UAE) are said to have soured in 2015, after Djibouti refused to lease ground to the UAE for military operations.

A year later, DP World signed a 30-year agreement with authorities in the unrecognised but de facto independent state of Somaliland to develop and manage the port of Berbera.

In February, Djibouti unilaterally terminated the Doraleh concession, claiming in court papers that its sovereignty was under threat and that the terminal contract was “seriously prejudicial to the country’s development imperatives and to the control of its most strategic infrastructure”, according to Forbes. This, it said, made taking control of the terminal “necessary and unavoidable [and] in accordance with international public law”. It then gave operational control of the terminal to CMPort. 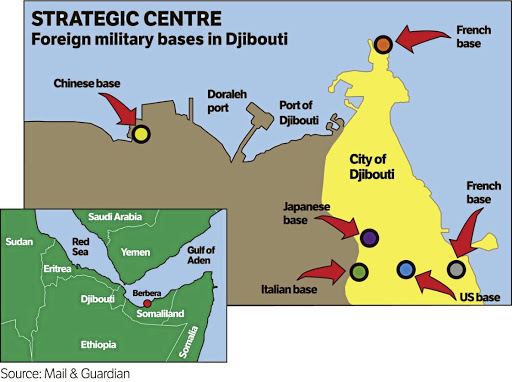 DP World contested the seizure, and in July the London Court of International Arbitration ruled that Djibouti’s unilateral termination of the agreement was unlawful and invalid. Djibouti did not participate in the arbitration, nor in an England and Wales high court case in September that also backed DP World. The country has simply refused to abide by the rulings.

In August, DP World subsidiaries sued CMPort in the High Court of Hong Kong for allegedly unlawfully inducing Djibouti to breach the deal with DP World. The court has yet to rule on the matter.

Legal details aside, the port seizure provides a glimpse into the tangle of broader political power plays and simmering tensions in the region.

Ethiopia, for one, has benefited from the fallout. Roughly 95% of the landlocked country’s imports and exports go through Doraleh — accounting for about 70% of the port’s activity, according to intelligence company Stratfor. This year it offset that dependence by buying into the $442m Berbera concession, taking a 19% share against Somaliland’s 30% and DP World’s controlling 51%.

The deal with the Somaliland authorities has not sat well with those in Somalia itself, given that the government in Mogadishu has unrealistic pretensions of ruling all of Somalia, including the breakaway Somaliland.

Such agreements are likely to boost the territory’s push for recognition as an independent state.

Then there are the larger players. In the wake of the February port seizure, Stratfor reported that Djibouti seemed likely to strike a deal with Chinese investors, though the country has denied this. CMPort has already invested $600m in an additional terminal at Doraleh, adjacent to China’s first overseas military base. Djibouti has given the country permission to house 10,000 soldiers at the base through to 2026, according to Al Jazeera.

Djibouti has thus come to constitute “the sharpest edge of the Washington-Beijing rivalry”, Africa Confidential editorialised earlier this year.

The move has also set the US behind Beijing in the strategy stakes in Africa, the publication reported Marine Corps general Thomas Waldhauser as saying. He told the US Congress in March that Chinese control of Doraleh would affect the US’s ability to run its own base in the country, and that “we are carefully monitoring Chinese encroachment and emergent military presence”.

Djibouti’s seizure of Doraleh and the politicking around it may just turn the great powers’ “great game” at the Red Sea bottleneck into a tense standoff.

Cabdifatax Ibrahim (Ronaldo) - November 27, 2022
0
Mohamed Olad HassanWASHINGTON — From refugees to elected office, 14 Somali Americans have won legislative seats across the U.S. this year. Some also have been...

Cabdifatax Ibrahim (Ronaldo) - November 27, 2022
0
The Somali government on Saturday announced that the country’s military has regained control of the strategic town of El Dhere from the al-Shabaab terrorist...

The US military operation in Somalia, explained

Cabdifatax Ibrahim (Ronaldo) - November 26, 2022
0
Ahead of a trip to Saudi Arabia this year, US President Joe Biden said he would be the first president to visit the Middle...

Cabdifatax Ibrahim (Ronaldo) - November 26, 2022
0
Feisal Omar and Abdi Sheikh Militants from Somalia’s al Shabaab attacked a military base in the central Galgaduud region on Friday, the group and a...
Load more
Follow
Subscribe to notifications

‘We had to flee’: Somalia on the run from extreme climate